Large multinationals present a difficult challenge to facilities facing competitive pressures from brother and sister plants across the globe. What if unions organized to make multinational corporations more responsive to the needs of their workers and keep competition between their units fair? 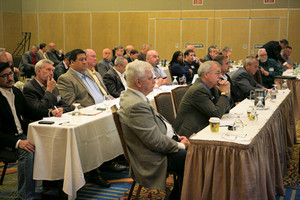 Siemens meeting at the IBEW.

That’s exactly what is happening at Siemens. Siemens employs 60,000 workers in the U.S. But only 3,200 belong to unions, including more than 800 IBEW in service and manufacturing jobs. The unionized work force is covered by 14 collective bargaining agreements with the IUE-Communications Workers, Steelworkers, Machinists, Autoworkers and Teamsters.

About 40 000 Siemens-workers in Germany, including engineers and managers, belong to unions. But Siemens has resisted efforts of several unions to organize workers at many North American locations. German trade unionists want to help change Siemens’ stance. “My fellow union members feel that the U.S. was better off when unions were stronger,” says Dirk Linder, a member of IG Metall, Germany’s largest metalworkers union.

In April, Linder, representing the Siemens Global Union Network, traveled to the United States to meet with members and leaders of the IBEW’s manufacturing branch at the Broadcasting, Manufacturing and Telecommunications Conference. The IBEW invited members of the IUE, who have developed relationships with German unionists, to the meeting to help welcome Linder.

The meeting was attended by IBEW Secretary-Treasurer Sam Chilia, five district vice presidents and local union members and representatives who work at North American Siemens plants. IBEW Manufacturing Department Director Randy Middleton met Linder two years ago at an international Siemens corporate meeting attended by members of the IUE, Middleton says he was impressed by the amount of respect German unionists received from Siemens. He immediately wanted to deepen ties with them and learn from their experience.

“In Germany, we have a large amount of influence over Siemens’ decisions,” Linder told attendees. The need to broaden union influence at other Siemens locations, he said, was underscored by the corporation’s rapidly-advancing global reach. In 1980, 67 percent of Siemens’ operations were located in Germany. That number has dropped to 32 percent, with the company establishing operations in Asia, South America and other regions.

To create a more level playing field for workers at the company, in 2012, IG Metall teamed with IndustriALL, a global union representing 50 million workers in mining, energy and manufacturing, to negotiate and sign an international framework agreement reaffirming the company’s commitment to fundamental workers’ rights. Those rights include equal opportunity, freedom of association and collective bargaining. Also signing the agreement were representatives of the Siemens Central Works Council, composed of union members and company executives elected by their peers. Work councils are mandatory under law for all German businesses with more than 1,000 employees. Unions sit on the councils’ boards of supervisors and exercise decision-making authority on subjects like layoffs and the distribution of work within companies, adapting national collective bargaining agreements to local conditions.

“Works councils are where our discussions [on Siemens’ long-term business developments] happen,” says Linder. “The international framework agreement is a step forward, but “it’s a piece of paper,” says Linder. To make it real, [unions] have to fight for it and make use of it.” He said he’s hopeful that Siemens will listen and respond to concerns of workers. The Siemens Global Union Network is proposing meetings and ongoing dialogue between Siemens-based unionists divided into regional “clusters” in Asia, South America, North America, Europe and China.

Phyllis Goines is an executive board member of Arlington, Texas, Local 220, an eight-year employee of a Siemens plant that produces electrical switch gears and power panels. “I’m very interested to know how Siemens treats workers in Germany,” says Goines, who serves as IBEW’s political coordinator in Texas. “There’s room for improvement in our local’s relationship with Siemens and I’m hoping the company lets changes manifest,” she says. Two nearby Siemens plants are unorganized, she expresses hope that the company will remain neutral during any organizing campaigns.

Wayne Cupp, president of IUE-CWA Local 84765 in Norwood, Ohio, whose plant produces large Siemens induction motors, said, “Whenever there’s an issue at Norwood, I feel very comfortable reaching across the waters to our counterparts in Germany and getting their advice.”  In a 2013 article in the CWA News, Cupp reported on a trip to Germany that included a visit to Siemens’ apprenticeship school in Nuremberg. “They not only teach workers machining and welding skills, they take the opportunity to teach these same workers how important organized labor is for the future,” said Cupp.

The IUE and IBEW are developing a strategic organizing campaign for Siemens’ plants that will be a subject for future global dialogue with unionists at the company. Middleton says he hopes to see an even more progressive relationship with German unions that will encompass all unions in the U.S. representing workers at the company.

The day after Linder’s visit, Siemens Senior Director of Human Resources Lee Vickers addressed BMT attendees with an overview of the company’s global holdings, then praised IBEW’s record on training, promoting safe practices and the Code of Excellence. “We can never compete on price, alone,” said Vickers. “We have to rely on quality and 170 years of service.”