IG Metall delegation visited the US

From April 21st – 28th, 2015, an IG Metall delegation visited the US. The visit was focused on the companies Siemens and Airbus, but included several meetings with other unions, company representatives, representatives of government and non-government organizations and a journalist. 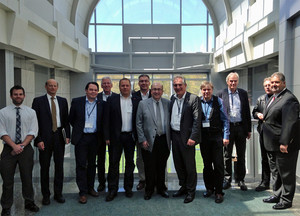 The delegation had meetings with the US unions IBEW, IUE-CWA, UAW and IAM to talk about further cooperation especially at Siemens and Airbus, but also at the German car companies that run factories in the US (VW, Daimler, BMW).

The IG Metall delegation also visited a Siemens turbine repair center at Houston and the Airbus facility at Mobile, Alabama, which is just starting the production. At these locations, there were also meetings with the union locals of IBEW at Houston and IAM at Mobile. The IAM is not yet represented at Airbus.

The meeting with the US management of Airbus at Mobile made clear that they will do everything that is possible to prevent the IAM from organizing the workers at Airbus. Especially the dinner with the management representatives took place in a quite aggressive atmosphere from the management’s side.

The delegation also had a dinner with Mrs. Lisa Davis, the US board member of Siemens, who is responsible for the energy business. Although Siemens is accepting the presence of unions at several locations in the US, the management is still perceiving unions as a “third party”, which is not welcome. At a healthcare service center in Oregon, the employees were the first to form a new union organization at a Siemens location in the US since more than thirty years.

The legal situation of the unions in the US was discussed at several meeting of our delegation. The representatives of the responsible government department of labor did not see any chances for a change for a foreseeable time. The legal, economic and social situation in the US was also the topic in the talks with the representative of the German embassy and the counselor for labor, health and social affairs at the German embassy, Hermann Nehls, a union representative who is delegated to the embassy.

Other meetings took place with non-government organizations such as the “Alliance for American Manufacturing” and the “Blue-Green Alliance”. In these meetings, the main issues were industrial policies and systems of vocational training. The question of vocational training and qualification of skilled workers were a main topic at almost all of the meetings of our delegation. It was pointed out to us that together with the process of de-industrialization especially in the ‘80’s and ‘90’s practically all instruments of qualification for high-skill industrial work have been abolished in the US. Now, these instruments have to be re-invented to lay ground for the re-industrialization that the government and its economy advisers would like to see.

The final meeting was with the “Washington Post” journalist Harold Meyerson, who explained the situation and current developments in the US from his point of view. He was also very interested to learn about the reasons for the preservation of the industrial basis of the German economy. We also discussed the role of the unions in this process.

The visit of the IG Metall delegation showed to all our meeting partners, especially to the unions and the company representatives, that IG Metall is interested in the way, German companies do their business in the US, and that it is ready to take influence. Although many things are very different in the US from Germany, there still should be a common understanding of the rights of employees like the right to form a union.