Meeting under the International Framework Agreement for the US

A basis for further dialogue between unions and management has been established: On June 13th/14th, the meeting under the International Framework Agreement (IFA) of Siemens for the US took place at Washington D.C.. 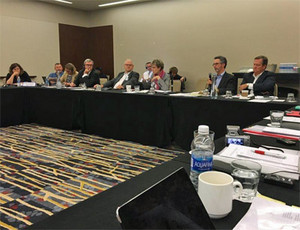 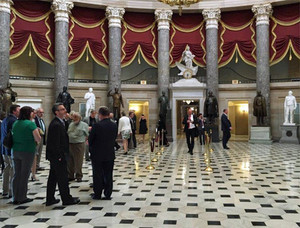 From the office of the Central Works Council:
Ev Zirkler

The meeting consisted of two parts, an internal meeting of the union representatives from the US and Germany and a meeting with management representatives.

The representatives of the US unions emphasized the importance of the meeting as the result of the cooperation of five important US unions at Siemens. They have agreed on the formation of a steering committee after the workshop that took place in February in the US. They now aim at the recognition of this steering committee as representation of the unions at Siemens in the US by the management.

The German union representatives pointed out, that similar achievements, such as the creation of a union network on national level in spite of a lack of legal support in national law, have been reached at Siemens for example in China or India.

Several issues concerning certain locations were addressed, such as the closure of the former Rolls-Royce plant in Mount Vernon, Ohio, the up to now insufficient integration of Dresser-Rand at Siemens or the partly bad relationship and communication with the local management.

Wilma Liebman held a lecture about the issue of “Neutrality Agreements”. She made clear, that US labour law leaves a lot of space for cooperative relations between companies and unions. The practical problem is the misuse of legal possibilities in a disruptive way by employers respectively anti-union groups of employees.

IG Metall, the Central Works Council of Siemens Germany and the US unions have agreed with the Siemens management to reach a supplemental agreement for the US that guarantees the implementation of the International Framework Agreement of Siemens in the US. The draft of this supplemental agreement was discussed at the meeting. It turned out to be clear, that there were several reasons for the US unions why the agreement could not yet be accepted.

Mr. Panigel gave information about the Siemens activities in the US. Siemens has about 50 000 employees in the US in more than 400 locations. 10 unions are represented at Siemens (IBEW, IUE-CWA, USW, IAM, UAW, BRS, IUOE, UA, UBC and FISU).

Mr. Spiegel and Mr. Stegemann informed about the business figures of Siemens in the US. Siemens has grown very much in the US mainly by acquisitions, so that now Siemens is among the top 15 companies in the US. Mrs. Brie Sachse, Mr. Etzwiler and Mrs. Reicherts gave information about the work of their departments.

A main issue of the discussion was the possible cooperation of management and unions. The unions offered their support of the company in several issues, such as discussions with politicians or vocational training.

There was also a discussion between two policy advisors from the Democratic respectively the Republican Party about the US politics. It was made clear that the political situation in the US is difficult. Both supposed presidential candidates are not supported by large parts of the voters.

The final and main discussion was about the draft of the supplemental agreement for the US. The union representatives pointed out the reasons, why they could not agree to the draft of the agreement. They also emphasized that they still see good chances to reach an agreement by further negotiations between management and the steering committee of the five unions that has been formed in February.

Mr. Panigel agreed to continue these negotiations. After this discussion, the meeting was closed with another internal meeting of the union representatives from the US and Germany. The participants agreed that the meeting fulfilled everybody’s expectations and that there are good chances to establish a social dialogue between unions and management in the US.