Reports from Siemens in several countries

Handling of the Covid-19 situation

The pandemic disease of Covid-19 has affected Siemens facilities all over the world. The union representatives at various locations have done their best to guarantee as well the maximum standard of protection for all employees as also the best possible standard of social security and protection of the wages. 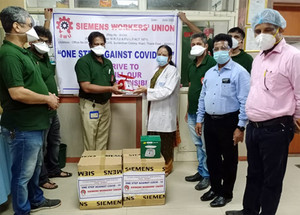 Here are some voices from different countries:

In Olean NY we have had some positive cases of covid -19 . None have made it into our facility yet.  We are still working as of today with no plans to shut down . Office employees ( non union ) are all working from home. I believe facility is doing everything they can for our safety.  If we the union bring up anything new we want done they implement it ASAP.  The company has told us "we will do anything you want just let us know". For safety for the union employees.  I have asked repeatedly for hazzard pay for our employees and have been turned down. A lot of other factories, facilities ect. ( not Siemens ) around us are giving there employees hazzard pay. Hazzard pay is 2.00 dollar a hour more on top of their hourly rate . Some places are getting up to 8.00 a hour more most are  2 or 3 dollars .

Union workers looking out for each other, respectful of each others space. The company has provided wipes, alcohols, bleach, rented temporary wash stations and provided all necessary (PPE) gloves, masks, etc.
We are adhering to social distancing within the plant ( balanced work stations, PPE in place where 6 feet cannot be guaranteed)
Working 3 shifts
Extra cleaning  in the plant.
Eat at work stations.
Taking temperatures at the start of each shift.
Flexibility with attendance policy.
Have instituted an Emergency Leave Policy for anyone who must self quarantine. Some others qualify on an individual basis. (10 days paid leave).
Daily COVID-19 meetings between Union and company leadership to work on any issues that may arise and discuss next steps.

We have entered into a couple of agreements with Siemens. We had a person last week that was told by their doctor to self isolate.  They were displaying all the symptoms of Covid-19.  Management shut the production room down that she was in and sent the people home that were in close proximity with her to self isolate also.   The people they sent home, were paid (according to the agreement with the union).  However, the next shift got wind of it and there was a mass call-in.  They did not even have enough people to run the lines.  Not a single line was running.  Management called in an outside cleaning company and had the production lines deep cleaned.  The individual tested was told 3 to 5 days for results.  Luckily it was negative, but we got to see how the company would respond….and they saw how we would if they didn’t do the right thing.

At the Siemens OCs in China for the effects and handlings of the corona virus crisis, the current situation is basically consistent and stable. Although the sudden outbreak of the epidemic has made many enterprises are experiencing all kinds of tests, and at the same time, more cohesion of the heart and joint efforts of all the staff of the company, encouraging the fight against the epidemic together! Siemens China companies braved to take responsibility with one united! The Trade Unions in China worked closely and take part in the anti-virus measures with the company only to minimize the risk after returning to work, to provide a safety guarantee for all employees. The more difficult it is, the more dedicated our employees are!  All the staff stick to our post and guard the Siemens Family with our practical actions.

The factories at Goa, Nashik, Aurangabad commenced their production with lower capacity.
Here, the government gave the permission to start the manufacturing activity after the lock-down with 10%-15% of the manpower capacity of the units.
In Goa, it commenced in April since they were not experiencing much corona cases. Now cases of corona in Goa are increasing.

Earlier, when the lock-down was declared, the government passed the order to pay full wages without any deduction, considering the employees are on duty.
Some companies in North India challenged this order of the government before the Apex Court. However, after 17th May 2020, the same direction of paying wages was removed by the Central Government, but the State of Maharashtra continues its order to pay the wages. These orders have been pronounced under the Disaster Management Act.
Now the Apex Court has given the direction that the paying of wages is the issue between the employees and the employer - hence they should settle this among themselves. This will have an impact across the country.

Siemens has paid the wages to all. Now they are asking the union to consider a cut in incentives. This is a challenge.
The negotiations for wage contracts for all the locations were in process.  Due to the lock-down, it is all pending now. It seems that it will take bad turn. Bonus payment, which was for the last financial year, is also pending. Now the management has good reason to delay it.

While commencing the production all care / precautions such as sanitizing, fumigation, safety kit, thermal checking, etc. strictly followed. The canteen is not started yet for precaution of contamination / spread of virus. While finalizing the list employees to resume the duties, their locations are verified by EHS personnel, e.g. the employees from the containment zone were not called to resume the duties.

Siemens has paid the wages to contract employees, too. In some cases, there were issues like contract not renewed / job base contract over etc.. We took a stand, that those contractors / firms, which have not paid the wages to their workmen have become non-compliant (since they have not followed the government order to pay the wages) and Siemens should not engage these contractors because of lack of business compliance. The business partners of Siemens should not be non-compliant.
This made it easier to put pressure on some contractors, who were dodging to pay the wages. So, we could succeed to ensure wages to the majority of the contract workmen working with us.