The Collective Bargain Agreement CBA of Kalwa Switchgear & Switchboard, Transformer, Nashik & Aurangabad is pending more than 28 months. Something is definitely wrong - the Indian colleagues appeal at IG Metall and Industriall Global Union to stand with them - and we do! 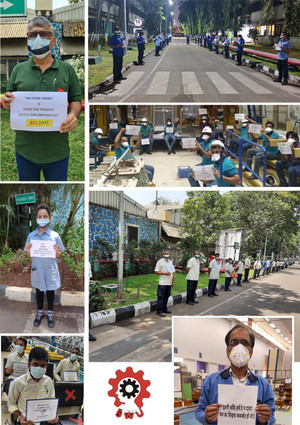 The duration of the former CBA of the Kalwa SI division and the Nashik Mobility division has come to an end on 31st Dec.2018. In case of the transformer unit, it was September 2019 and the CBA of the Aurangabad SI unit expired in February 2019.

In the last five decades never ever any CBA has been signed on time. It was always delayed by the period of 10 months to 30 months and the company has given the total agreed rise in wages as arrears for the said period. All companies follow the same practice of paying the arrears for the delayed period.

Now the company wishes to give away the practice and deprive the blue collar workers of the amount of arrears. The delay is not because of the union. The union has cooperated with the management to ramp up the capacity in Covid times. The union has resolved the issue of Covid Cost Saving measures and other related issues.

The Union has neither initiated the said issue with the authorities nor has hampered the production, and in reciprocation the union received nothing than the delay from the company. The workmen at Kalwe, transformer unit and at the Nashik unit have not taken lunch / dinner on two occasions on 1st April & 3rd May 2021 to show their dissatisfaction. This has also not fetched any result. No food by workmen may be food for thought for the management to settle our demand fast.