The Czech union OS KOVO had invited union representatives from Siemens in the Czech Republic, Germany and Austria to their annual meeting. The meeting had been postponed because of the situation caused by corona and took place on August 26th, 2020. At this time Prague had a low level of the virus. Nonetheless, the necessary precautions were taken during the meeting. 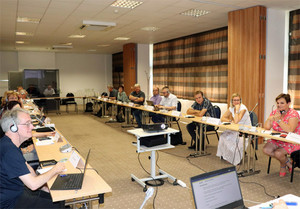 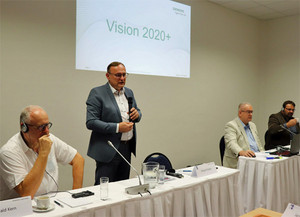 Harald Kern, the president of the Siemens Europe Committee, the European Works Council of Siemens, was invited from Germany, Martina Schneller from the International Department of the union PRO-GE, joined the meeting as representative from Austria. The Czech participants represented the Siemens locations in Mohelnice, Letohrad, Frenštát pod Radhoštěm, Brno (Siemens Energy), Trutnov, Drásov and Štětí (Siemens Energy).

Harald Kern gave some information on the current developments at Siemens. Since September 28th, Siemens Energy has split off from Siemens. Consequently, a new European Works Council (EWC) will be formed at Siemens Energy. The process of this formation has already started.

The union representatives in Germany strongly appreciate, that the designated new CEO of Siemens, Dr. Busch, has spoken out against changing Siemens into a financial holding. Harald Kern recommended the unions to actively involve themselves into the process of change inside the company. In Germany, the union representatives have enforced the implementation of special funds, financed by the company, to support innovation and training of the employees. This idea could be transferred to other countries.

The participants discussed the results of the collective bargaining of the union IG Metall in Germany, which has been spread and misunderstood as a “zero-wage-raise” agreement. It was clarified, that this is not true for Germany and, in first place, does not set any general standard for Siemens globally.

Mr. Palíšek, the CEO of Siemens in the Czech Republic, joined the meeting for a discussion with the participants. He described the situation of Siemens and Siemens Energy in the Czech Republic as generally positive. He particularly mentioned the improvements at the locations in Frenštát, Drásov and Trutnov. The factories have not been affected very much by the restrictions and their consequences caused by the virus situation. He declared his support for the implementation of means to support innovation and training for the employees at Siemens in the Czech Republic in a joint activity together with the union representatives.

All participants gave a report on the handling of the situation caused by the new coronavirus in their countries resp. at their locations.
The union representatives from the Czech Republic gave reports, which showed, that strong measures were taken everywhere at Siemens to safeguard the health of the employees.

Jaroslav Souček gave an overview of the general economic and social situation at the Czech Republic.

The participants agreed to continue the annual meetings of the Siemens representatives.