Online meeting from Europe, Asia and the Americas

For the 10th anniversary of Siemens' International Framework Agreement, on July 26th/27th, 2022, an online meeting of employee representatives from Europe, Asian and American countries took place. It was divided in two parts due to the time differences between the participating countries. 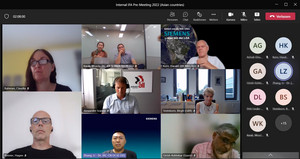 At the beginning of both sessions, Birgit Steinborn, chairwoman of the Central Works Council of Siemens Germany and Deputy Chairwoman of the Siemens Supervisory Board, explained that the meeting had been planned in presence, but changed due to restrictions because of the corona virus.

The International Framework Agreement (IFA) of Siemens has been signed on July 25th, 2012, exactly ten years ago. It has been a milestone of transnational cooperation of the employee representatives of Siemens and was was the basis of several successes - but there still are challenges.

Especially the crisis caused by the Covid-19 pandemic showed the importance of union representations and their influence. The pandemic crisis stimulated advancements in the field of digital communication. The latest and additional challenges are the war in Ukraine and the ongoing interruptions of the global supply chains.

Birgit Steinborn also mentioned, that 2022 marks Siemens' 175th anniversary. Currently, there are many changes: Siemens is now only holding a minority share of Siemens Energy, and is itself divided in Digital Industries, Smart Infrastructure and Siemens Mobility as a subsidiary; Siemens Healthineers is majority-owned by Siemens, but has its own management board and own stocks.

Kan Matsuzaki ponted out in opening remarks on behalf of IndustriAll, that the union movement is under pressure in many countries. The Siemens IFA is working rather well, although there are occurring problems from time to time, like just now in India. The local management is often not aware of the content and the meaning of the IFA. It is necessary to conclude a Global Framework Agreement for Siemens Energy to keep the standards having been reached at Siemens. In addition, the global union network of Siemens should also include Siemens Energy.

Harald Kern, member of the Central Works Council of Siemens Germany and also member of the Siemens Supervisory Board, added some criticism of the so-called DEGREE-framework of Siemens. Union rights are completely missing it, although it claims to cover the issues of sustainability and social responsibility. This implies the necessity of an improved status of the IFA at Siemens. He also mentioned the carve-out of the Large Drives Applications as a negative example of the management decisions. The employee representatives in Germany are still trying to take influence on the management to change this decision.

Claudia Rahman from the International Department of IG Metall emphasized, that conflicts cannot only be solved on local level. The headquarter of the company has to take responsibility for any conflict between management and union in the company. She also mentioned the new German supply chain law, which obliges the multinational companies to keep certain standards worldwide.

Hagen Reimer, responsible for Siemens at IG Metall and also member of the supervisory board, pointed out, that an agreement like the IFA is genreally only as strong as the employee representatives are able to enforce it. He encouraged the participants of the meeting to express their critical points to the management, because the headquarter management often does not receive this information at all.

India: Girish Ashtekar, the General Secretary of the “Siemens Workers´ Union” said, that several collective agreements could be achieved at Siemens in India in this year. Nonetheless, there are major problems in India beween union and management. The manufacturing of motors has been outsourced in Kalwa. The management now refuses possibilities of early-retirement for employees of other locations, so that there are job opportunities for employees of the motor facility in Kalwa.

Siemens has purchased the company C&S Electric from India. The working conditions there are poor, and the management is actively fighting unions. The “Siemens Workers´ Union” is trying to solve the problems with the help of the employee representatives in Germany.
In Vadodara, there is a small group (82) of workers, who still have to retire at the age of 58. They are the only employees of Siemens with this retirement age, all the others can retire at 60. Early retirement is problematic in India because of low pensions.

South Korea: The union representatives from South Korea wanted to know, if there are headquarter regulations for incentive schemes. The management refuses to negotiate the flexible wage components with the union. The union representatives also asked, if there are global guidelines at Siemens for telework, especially concerning the support of the teleworking employees. There is a negative effect on the reputation of Siemens caused by the lay-offs at Siemens Energy, which happened in a very controversial way including court procedures. Tobias Bäumler, the deputy chairman of the Central Works Council of Siemens Germany and member of the Siemens Supervisory Board, explained, that regarding the issue of teleworking, there are various regulations depending on different national law and agreements with the unions.

China: The unions of Siemens in China have made a survey, which showed, that there are no major problems in the context of the Siemens IFA in China. The unions see the necessity of improvements in the field of vocational training, especially for the blue collar workers. This could be ensured by an agreement between management and unions. Dr. Zhang Li explained, that the retirement age for men is generally 60, whereas women can retire at 55 (white collar) or even 50 (blue collar). There are tendencies to extend the working lifetime.

Birgit Steinborn asked for the current regulations for the Covid-19 restrictions, especially in China. Dr. Zhang Li responded, that currently, there are no general shut-downs in China, but that this can always happen on local level. The policy towards the pandemic will not change before the party congress in October/November. The lockdowns have strained the Chines economy quite hard.

Kwak Won Ju from Seoul, South Korea, said, that more than 50 % of the Siemens employees in Seoul had to work from home during the pandemic. At the moment, there are no more restrictions anymore.

Birgit Steinborn pointed out, that the DEGREE strategy can be helpful for the concerns of the unions, if applied correctly. Kan Matsuzaki added, that the issues digitalization and gender equality also should be addressed towards the management. The topics of health and safety should be complemented in the Siemens IFA.

USA: The union representatives from Norwood, Ohio, pointed out, that their location is also concerned by the decision to carve out the unit “Large Drives Applications”. Parts of the production are transferred to low cost countries. The union representation sees this very critical due to the current interruption of the global supply chains.

Chile: Patricio Aguilera mentioned the social unrest in Chile of the last years and its result, the draft of a new constitution, on which the people of Chile will decide in September. He described the anti-virus measures of the management of Siemens in Chile as positive.
He also sees better technical possibilities for communication, which have been enforced during the pandemic. The mining business of Siemens in Chile will also be carved out. The union have safeguarded the working conditions of the concerned employees.

Brasil: The union representatives claim, that all negotiations of the unions with the management have become very complicated because of the splitting of the company into several more or less independent parts.

On the second day, Mrs. Wiese, the HR director of Siemens and member of the management board, and representatives of HR joined the meetings. She explained, that “Human Resources” has been renamed “People and Organisation”. She said, that Siemens´ DEGREE program is an answer to the current challenges and explained the strategic principles of Siemens and the combination of soft- and hardware by Siemens in the various business fields.

She then gave some figures on the development of the business of Siemens and also mentioned the challenges caused by the interruption of the global supply chains. Mrs. Wiese still sees a shortfall at Siemens regarding the issue of women in leading positions in the company.

The questions of the participants of the online meeting were then discussed.

Shin Hawon from Seoul, Soth Korea, asked, if incentive payments can be negotiated locally or if there are limits required by the headquarter in Germany. Mrs. Wiese responded, that wages are always decided resp. negotiated locally, according to the local law and other local regulations.

Girish Ashtekar from India mentioned the issues of the refused transfers of the former employees of the motor production in Kalwa (Thane), the anti-union activities of the C&S Electric management and the retirement age of 58 only for 82 employees of the facility in Vadodara. Harald Kern added, that the employees´ representatives on the Siemens Supervisory Board are quite upset about the anti-union activities at C&S Electric in India, too. He underlined, that this issue will be followed up. This problem could not be solved during the meeting.

Dr. Zhang Li from Beijing, China, mentioned the positive response from the survey by the union chairmen of Siemens China.
He then asked for the development and training measures, especially for the blue collar workers of Siemens China. Meng Erping added the proposal of a collective agreement for Siemens China on the issue of vocational training and education.

Mrs. Wiese responded, that Siemens China is already exemplary in the field of vocational training. She said, that the head of “People and Organization” (formerly HR) of Siemens China supports the suggestions of the unions.

Patricio Aguilera from Chile mentioned, that Siemens in Chile handled the crisis caused by the spread of the corona virus and the anti-corona virus restrictions very well. He then asked, how vocational training can be offered to all employees. Mrs. Wiese explained, that the plan is to roll out these training opportunities step by step to all employees.

Harald Kern said, that this is obviously ideologically motivated. There should be some positive examples for the cooperation of local management and union. The topic will be followed up. Mrs. Wiese responded, that generally, the German concept of apprenticeship programs and vocational training is transferred to other countries including the US. The local management is responsible for the implementation.

Vic Henderson (Norwood, USA; IUE-CWA) criticized the relocation of manufacturing processes from Norwood to Drásov (Czech Republic). He sees this as a negative decision especially because of the current disruption of global supply chains.
Harald Kern agreed and stated, that the decision to carve out the unit “Large Drives Applications” should be revised under the new global circumstances.

Luis Carlos de Oliveira from Jundiaí, Brasil, said, that the separation of the company Siemens into several more or less independent companies complicates negotiations and dialogue of the unions with the management. Mrs. Wiese could not say anything to this topic, but promised to provide an answer later after checking the situation in Brasil.

Harald Kern underlined the importance of health and safety issues in his final statement. New laws, like the supply chain law in Germany, have to be checked for their practical implications.