On May 14th-16th, 35 union representatives from Siemens locations all over the US and Canada met in San Antonio, Texas, for their annual meeting to exchange information and to discuss their issues. The meeting was organized and hosted by Randy Middleton and Brian Lamm from IBEW and was led by the Steering Committee of the unions represented at Siemens in the US and Canada. 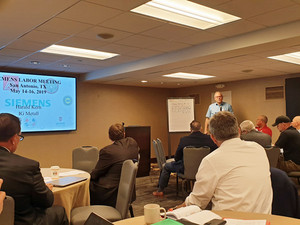 The meeting took place under negative circumstances – last year, three of the unions were concerned by closings of unionized plants. The unions criticize strongly the way, in which these closings have been communicated by the US management of Siemens. There has been no attempt to have a consultation with the concerned unions to look for other solutions than to just close down the facilities.

The unions also think, that Canada should be included in the Memorandum of Understanding, that has been concluded for Siemens in the US in 2016.

Jürgen Kerner, the top representative of IG Metall on the Supervisory Board of Siemens, pointed out, that IG Metall intensely supports the network of the unions at Siemens in the US and Canada. IG Metall is demanding the same level of high standards for all Siemens workers worldwide.

Harald Kern, also member of the Supervisory Board of Siemens, explained the current changes at Siemens. The energy market is globally in a deep crisis, which effects all involved companies (like also GE, among others). The decision, which has been made at Siemens, to split off the energy business and to form a new company, seems to at least offer a chance for the new company and its employees to survive on at the moment shrinking market and to be globally competitive. The new energy company will be based in Germany, which gives the unions the chance to keep as much influence as possible. Improvements of the quality of the management of the new company will also be essential.

Harald Kern also explained the mechanisms of the “Innovation Fund”, that has been demanded and achieved by the union representatives at Siemens in Germany. He points out, that, according to the management, the fund was intended to be a global tool. In the US, the unions, that are represented at Siemens, could negotiate with the management about the application of the Innovation Fund in the US.

Hagen Reimer explained the cooperation of unions and Works Councils in Germany and made this clear by describing the example of Siemens. He also gave some information about the work of the Supervisory Board.

The CFO of Siemens USA, Mr. Stumpf, participated for some time in the meeting together with Mr. Argentieri and his HR team. Mr. Stumpf gave some information about the current developments of the business of Siemens, especially in the US.

Following this part of the meeting, the questions of the unions were discussed:

There is no centralized coordination for apprenticeship programs at Siemens in the US. Consequently, the existence of apprenticeship activities completely depends on the motivation of the local management. This makes it difficult to create these programs, because the local sites have to bear the costs all by themselves. The result is, that there are almost no serious activities directed at apprenticeship programs at Siemens in the US, although the issue is very urgent because of the aging workforce.

The unions have offered several apprenticeship programs to Siemens, which all have been ignored or rejected, probably only, because the unions have proposed them.

- Consultation of the unions in the case of plant closures:

Siemens has not given any proper information, not to mention consultation, to the unions which have been effected by plant closures. The management hides behind “decisions on a global level”.

- Employment of workers of closed shops:

There are some examples of workers of closed-down shops, which could be hired at another Siemens facility. Especially in the case of the workers from Wellsville, New York, this possibility has to be checked, because the future of these workers is still unclear.

The unions criticize the relocation of work from unionized to non-unionized facilities. The management denies that there is a company policy in this direction. Nevertheless, the management rejects the possibility of card checks whenever a union tries to achieve the representation at a Siemens facility. This shows the ongoing mistrust of the management towards the unions in the US.

- “Memorandum of Understanding” for Canada:

According to the management, it has to be discussed in Canada, if the “Memorandum of Understanding” that has been concluded for the US, can be transferred to Canada. There seem to be enough reasons to do this, because the anti-union attitude of the management is – at least in the Canadian province Ontario – the same as in the US.

After the meeting with the management representatives, all participants of the union meeting agreed, that the discussion was very disappointing, especially because the managers who came to the meeting, did not take responsibility and were hiding behind decisions that were made elsewhere. This did not meet the expectations of the participants.

Brad Markell (AFL-CIO) gave some information about the existing council of 11 industrial US unions and suggested to give a report about the meetings on Siemens to this council.

The union representatives from the sites in Wellsville, New York, (IAM) and from Houston (IBEW), that have been decided to be closed down, gave some information about their plant closure agreements.

Hermann Nehls (DGB, Germany) told the participants of the meeting about the experiences, he just made during his study visit to the US dealing with apprenticeship programs. He offered a workshop in Germany with union representatives from Siemens in the US to work out a joint position of the unions on the issue of apprenticeship programs.

The participants gave reports about their local union issues.

A huge common problem seems to be the wage payment procedure. There seem to be many mistakes and delays in this process, which is not acceptable.

The participants of the meeting agreed, that the organizing of more Siemens facilities is key to improve the position of the unions in front of the management. IBEW has recently succeeded in winning two union elections, both at Siemens Healthineers, one in Walpole, Massachusetts, one in Mississauga, Ontario, Canada.