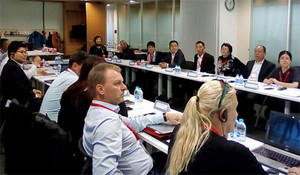 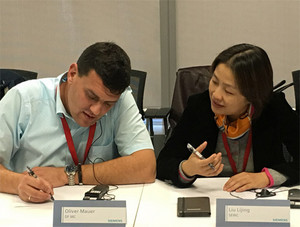 The workshop covered the issue of digitalization and „Industry 4.0“ and especially focussed on the current situation at Siemens in Germany and China and the demands and strategies of the union representations to defend the interests of the employees in the ongoing process of digitalization.

The participants showed presentations of examples of digitalization which are applied at Siemens in Germany and China and discussed their points of view and the strategies of the unions to answer the current changes and to protect the interests of the employees.

They also explained the systems of employee representation and unions in Germany resp. China.

The results of the workshop discussion can be summarized in these points:

- Digitalization has a strong effect on all levels of the process not only of production, but also on administration, research and development, purchasing, logistics and others.

- Digitalization will help to increase the productivity, but this also means that it endangers the future of jobs.

- Digitalization can help to increase the standards of security at work and of the quality of the products.

- Digitalization will change the way how work is executed. This will probably evoke resistance, so the process has to be explained and made transparent.

- The changes caused or supported by the process of digitalization make efforts in the field of vocational training necessary. This has to be explained to the employees to get their support and approval.

- The question of data security is more challenging in Germany than in China, although this may change in the future (in one way or the other).

The participants visited the Digital Exhibition Center of Siemens in Beijing, the Flender factory in Tianjin and the factory of the supplier of Flender, Yuxuan Electromechanical Equipment, also in Tianjin.