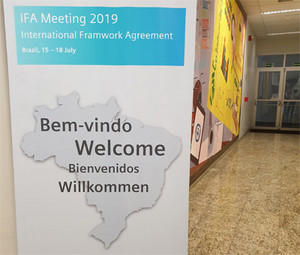 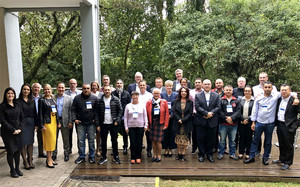 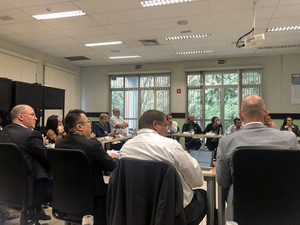 Valter Sanches gave some basic information about the work of IndustriAll. He then explained both the German and the Brazilian system of workers´ representation.

The current Brazilian government is obstructing the work of the unions in many ways. One major problem is the abolishment of the mandatory union contribution since 2017. The current right-wing president of Brazil also wants to suspend all union rights as long as the unemployment rate is high. This proposal is still discussed in parliament. Additionally, the government also is planning to abolish the Health and Safety Commissions, which are today the only instrument of workers´ representation on the shop floor level in Brazil.

Katharina Hofmann de Moura informed about the current political situation in Brazil. She sees democracy extremely threatened by the politics of president Bolsonaro. The economy is stagnating, the poverty rate is high and is even getting worse. The government is cutting public spending, especially in the health and the education sector. Lately, resistance against this policy is increasing in Brazil and the president is also getting more and more involved in conflicts with several institutions.

During the discussion of both inputs, all participants agreed to deny the current government policy and to support the resistance against it as much as possible. Javier González pointed out, that the situation in Argentina is quite similar. The unions hope for the replacement of the current president by the next elections. His promises were not fulfilled. This also applies to the new jobs that were expected at Siemens in Argentina.

Birgit Steinborn said that Siemens has a history in Brazil since 1867 and is planning big investments there. She also emphasized the importance of the protection of democracy. She sees the International Framework Agreement of Siemens in the context of democracy and international cooperation of unions. She then explained the current changes at Siemens, especially the spin-off of the Gas and Power business.

The workers´ representatives on the Supervisory Board of Siemens have finally approved this spin-off, because they could manage to reach some positive regulations and because they see this solution as the best of all achievable possibilities. The union representatives of Siemens and the Gas and Power will still continue their cooperation, even if the business will be split off from Siemens.

The union representatives from Brazil, Chile and Argentina discussed their major issues and especially their questions to the management for the next day. These were:
-    Some examples of bad working conditions in Jundiaí
-    Problems with the payroll accounting process
-    Communication difficulties with the HR hotline, which has been relocated to Costa Rica
-    Worries about the separation of Gas and Power from the rest of Siemens
-    Unequal regulations of profit share at the various locations of Siemens
-    Lack of information and dialogue with the management

All participants agree that it is important to strengthen their network at Siemens in South America.

Mr. Clark opened the second day of the meeting with comments on the current situation in Brazil and the importance of Brazil for Siemens. He emphasized the capability of the energy sector in Brazil. Mrs. Kugel explained the current business situation of Siemens and gave some information about the background of the announced split-off of the energy business from Siemens.

The union representatives from South America addressed their issues and underlined their demand for an improvement of the dialogue with the management and the standard of information that is provided to the unions. Mrs. Kugel answered that Siemens will follow the relevant law. She also said that the influence of the Siemens country organisations on global decisions is very small. Siemens is willing to continue the dialogue with the unions in South America.

She emphasized that the energy business will not be sold by Siemens, but will form a new company, of which Siemens will remain a big shareholder. She said that HR is still present at Brazil and the other countries in South America. The hotline that is operated from Costa Rica is just a support function. Mr. Clark added that he sees good chances for the future of the Siemens energy business in Brazil.

Mrs. Requena promised to check the complaints about the problems with the payroll. She also said that equal treatment of all employees is important for Siemens. She gave an additional input about the activities in the fields of “Diversity”, special health treatment for women and recruitment of qualified workforce. The latter concerns mainly digital qualifications.

Luis Carlos de Oliveira asked to break down the figures of the numbers of accidents to each location so that there will be more transparency. Mrs. Rotondaro Koch agreed to provide this information.

Prof. Pastore from the São Paulo University gave some information about the general situation in Brazil. He especially mentioned the effects of poverty on society and the need for change in several fields of social and economic developments.