Meeting of the Siemens Europe Committee

On October 5th/6th, 2021, 31 delegates from 20 countries* took part in a meeting of the Siemens Europe Committee (SEC) in Lisbon. One delegate from the Czech Republic, one from the UK, and the delegates from Hungary, Slovakia and Sweden were missing. 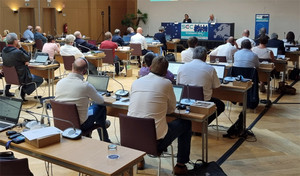 The meeting was the first meeting of the SEC in presence since 2019 and held under specific conditions to prevent the spread of the corona virus. All participants were vaccinated and additionally tested.

In his opening speech, Harald Kern (Germany), the SEC´s chairman, said, that 50 % of the SEC delegates are new. He also described the latest changes inside the company as fundamental.

Melanie Vidigueira (Portugal) gave some information on history, current political situation and culture of Portugal, and the participants of the meeting presented themselves.

Birgit Steinborn (Germany), the chairwoman of the Central Works Council of Siemens Germany, commented on the current situation of Siemens. She criticized especially the management´s decision to carve out the business field „Large Drives Applications“ (LDA). She generally pointed out, that there is a discrepance between some of the declared objectives of the management board and the predominating pressure to constantly increase the profit margin of the company.

Hagen Reimer (IG Metall, Germany) explained to the delegates his role as responsible union official for the SEC. He also complimented the whole SEC for its work as representative body of all employees of Siemens in Europe.

Harald Kern and Dirk Linder (IG Metall) presented the project, that the leadership of the SEC is intending to carry out with the SEC delegates. This European union organization „Eurocadres“ will support the SEC with this project, especially with the application for EU funding. The SEC delegates unanimously agreed to the project and answered some guiding questions to define their requirements for it.

The delegates gave short reports of the situation and the major issues in their home countries. Many reports focussed on the increasing worries about the carve-outs and the fragmentation of the company and the expansion of the home-office working model with all its pros and cons. The delegates from Finland and Greece reported on the blocked wage negotiations in their home countries.

On the second day of the meeting, representatives of the management of Siemens Portugal joined the meeting. Mrs. Wiese, HR director and member of the management board of Siemens, only took part by video. Harald Kern opened this part of the SEC meeting with a critical speech on the predominance of profit goals at Siemens and the lack of commitment to collective agreements and cooperation with unions and employee representatives. Mr. Pires de Miranda presented Siemens Portugal and mentioned some of the main projects of Siemens in Portugal, like the Lisbon Metro, automatisation at VW or building technology in Lisbon´s largest hospital.

Mrs. Wiese explained the current business situation of Siemens and the main strategic objectives of the management fort he company.  As the SEC delegates discussed their issues with her, the main topics were the effects of the expansion of the home-office working model and the blocked wage negotiations with the unions in some countries.

Mr. Huppert gave some information on Siemens Advanta. Advanta was created as an internal IT consulting and implementation unit with locations all over the world. The market in this business field is extremely fragmented.

Mr. Stülpner informed the SEC delegates about the acquisition of the company Varian by Healthineers. The main purpose of this acquisition is to bundle the competencies of Healthineers in the field of cancer therapy. There is only a very small number of employees of Varian in Europe.

In the final internal discussion, the SEC delegates evaluated the meeting positive, because it was the first meeting in physical presence after a long time. Several delegates criticized Mrs. Wiese´s presentation, especially because of the big number of slides and the missing or insufficient content of some answers.