This is the first global agreement reached in the renewable energy sector and will promote social dialogue and strengthen the labour rights of Siemens Gamesa workers around the world. 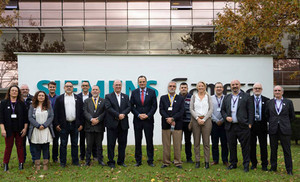 After a long negotiation process, the signing of the Global Labor Agreement between the general secretary of Industriall Global Union, Valter Sanches, and the CEO of Siemens Gamesa, Marckus Tacke, took place on November 25 at Siemens Gamesa's headquarters in Zamudio. The event was attended by UGT FICA, the sector secretary of Capital Goods José Antonio Guerra, the Federal Head of Renewables and Secretary of Organization of the State Union Section of Siemens Gamesa, Mikel Zarandona, and the secretary of the chemical sector, José Carlos Ruiz.

UGT FICA values the excellent work carried out by Siemens Gamesa and the trade unions in making the creation of this Global Labour Agreement possible. From now on, Siemens Gamesa can boast of being the only industrial group with a global agreement in the renewables sector, and workers can also be satisfied with this agreement, from which they clearly benefit.
Such agreements help to promote social dialogue and strengthen the labour rights of Siemens Gamesa workers around the world by improving trade union activity and coordination between workers' representatives in other countries.

Instruments such as the Global Labour Agreements serve, in the opinion of UGT FICA, to advance in achieving the dignity of employment and respect for labour rights, an objective of the trade union movement, which since its inception has fostered the internationalist side.
At UGT FICA we hope that this agreement of a national company will be an example to follow in a sector which, like renewable energies, is so closely linked to the preservation of the environment. From the Federation we cannot forget either the need to worry about conquering, every day more, parcels of environmental quality for people in order to contribute to build a better world. This is precisely what this agreement is about.

Notice by the IG Metall: The Global Framework Agreement of Gamesa with the global union confederation IndustriAll has been existing since 2015.

This agreement has now been renewed with Siemens Gamesa. The IG Metall generally supports all attempts and ambitions of companies inside the Siemens group and the respective unions to safeguard and even expand the rights of the employees and their representations.

Since the future of Siemens Gamesa will be connected to the new company Siemens Energy, the objective has to be a Global Framework Agreement combined with the support of building a global union network specific for this company.