Meeting on New Company in the energy business

On September 26th, 30 union representatives from 13 European countries held a meeting in Nuremberg, Germany, to discuss the consequences of the decision to spin off the energy business from Siemens. 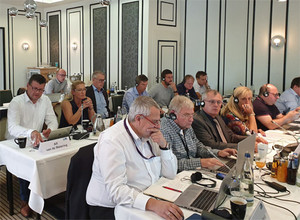 Harald Kern, the chairman of the Siemens Europe Committee (SEC), chaired the meeting. He and Robert Kensbock, the deputy chairman of the Central Works Council of Siemens in Germany, who will also be changing to the new company, explained the background of the split-off of the energy business from Siemens.

The first step will be the formal “carve-out” of the concerned parts of Siemens until March. The preconditions of this “carve-out” are different depending on each country. In some countries, Siemens will be carved out from the energy part of the business, because this is the dominating part of Siemens in these countries today.

The Siemens shares of Siemens-Gamesa will be transferred to the new company. The new company will also integrate most activities of the Solutions business, the trans-former business and activities such as hydrogen energy and “Power to Gas”.

The union representatives see good chances for the future of the new company as long as there will be capable management and realistic profit expectations. The inclusion of the Solu-tions business provides many possibilities of innovative applications of the use of energy, for example, for drives.

The name of the new company has not been decided yet. Mr. Michael Sen has been designated as its CEO.

In the second part of the meeting, Mr. Maas and Mr. Gärtner joined the meeting as representatives of the management. They were accompanied by Dr. Wallisch, Mrs. Günther, Mr. Magas and Mrs. Reiter from HR. Mr. Maas and Mr. Gärtner gave some information about the background of the decision to split off the energy business from their perspective. To their opinion, the attitude of the concerned employees is more positive now than it had been when the split was announced.

The union representatives expressed their concerns about the future of the new company, but also agreed that there will be good chances under certain preconditions. Some questions could not be answered by the management representatives, partly because these questions have to be discussed on local level.

All participants of the meeting agreed that more information has to be given to the employees. The information process is still running.

In their final internal discussion, the union representatives agreed to address the management of the new company with a joint declaration to express their expectations.