On August 29th 2019, IG Metall invited union representatives from the European countries with the major part of the employees of Siemens Gamesa Renewable Energy (SGRE) to Frankfurt. 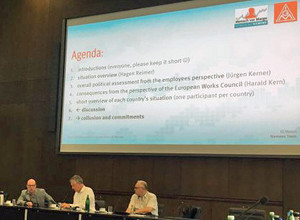 Hagen Reimer, Jürgen Kerner and Harald Kern reporting about the decision of the employee representatives on the supervisory board.

Union representatives from Dansk Metal (Denmark, especially from Brande), CCOO (Spain), UGT (Spain) and Unite (UK, Hull) attended the meeting. Jürgen Kerner, Hagen Reimer, Robert Kensbock, Harald Kern and Bettina Haller, who are all union or employee representatives on the Siemens Supervisory Board, informed the participants of the meeting about the background of the decision of the Siemens Supervisory Board to split off the energy business from the rest of the company and to transfer the Siemens shares of SGRE to the new company.

The new company will be carved out of Siemens beginning next year. The main background of the decision is the expectation of profit rates at Siemens which are unrealistic in the energy business. The union representatives on the Supervisory Board of Siemens tried to guarantee the competitiveness of the new company as much as possible. This is, why the transfer of the Siemens shares of SGRE to the new energy company was a logical step.

The new company will be located in Germany, which means that the highest standard of employee participation will remain guaranteed.
All legal bodies of representation, including a European Works Council, will have to be elected for the new company. The union representatives from Denmark, Spain and UK expressed their concerns about the future of SGRE and the new company.
They also emphasized the importance of maintaining the existing union network and the working group of the European Works Council for SGRE.

All participants agreed to use the strong union representation at the sites of the new company including SGRE to take as much influence as possible on the management and the development of the company. To support this, a line of information and communication will be built between all involved union representatives in Europe.